Student workers at UBC are organizing

Together, we can make the University of British Columbia a better space for student workers. Take action to improve your workplace today.
Sign a card

The Committee to Organize UBC is a grassroots campaign to unionize ALL student workers at the University of British Columbia (UBC). It was started by workers all across campus to fight for a dignified living for every student. We want everyone to be able to not just survive while studying in Vancouver, but be paid a fair wage and have the kinds of protections a collective agreement ensures, against vulnerabilities like being let go for any reason at any time, and having recourse with actual teeth when facing discrimination or bullying on the job.

The primary aim of the organizing committee is:

To bring all student workers into a directly democratic, inclusive union (CUPE Local 2278) where worker participation in their union is at the core of everything we do. Only by ensuring full, meaningful, and equitable chances for everyone to participate in our grassroots group can we hope to build a successful movement that will truly improve the lives of everyone at UBC.

The University of British Columbia is the largest university in the province and one of the largest in the nation. And yet, it lags behind many other schools who already have unionized research assistants, academic and lab assistants, and other student worker positions. This is despite the fact that the University cannot run without us.

The lack of a union has meant diminished ability to affect your working conditions or get fair wages. It has meant lower health and safety protocols, unclear or inconsistent hiring processes, unchallenged harassment, lack of support for mental health, widespread overwork/burnout, and having to deal with problems at work alone.

The only way to address these issues and advance the rights of graduate students and other academic workers on campus is to organize into a union and be protected under a collective agreement with the university.

Entry into the union means we can fight together for:

Together, we can make the University of British Columbia a better space for student workers.

Are you ready to take action to improve your workplace? 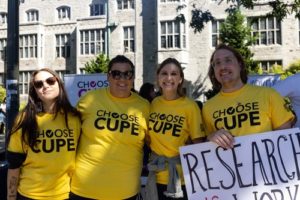 Organize UBC in the Ubyssey

The Committee to Organize UBC received coverage in the Ubyssey following the success of our presence at Imagine Day. Authors Anabella McElroy and Nathan Bawaan note that “[in] previous student unionization campaigns at UBC, eligible employees have voted overwhelmingly in favour of unionizing after well-over 45 percent signed cards”, and mention the years of maintained interest in union representation from research assistants, academic assistants, and other student workers on campus not currently part of CUPE 2278.  Local president Phyllis Pearson is quoted as “[wanting] to show you a strong campaign”, and since launch, interest and engagement with the campaign to 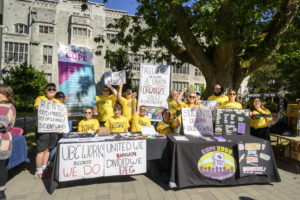 We have now launched our campaign to unionize student workers at UBC! For far too long, research assistants and academic assistants have endured low wages, no job protections, and poor working conditions. We say enough is enough! All student workers deserve enough money to live and the job security that a union provides. We are a collective of graduate and undergraduate students coming together to unionize ALL research student workersat UBC. Today marks the start of card signing, which we encourage all RAs and AAs to sign now. Thanks to BC’s new one-step process, if we can get 55% of

There are no upcoming events.

This error message is only visible to WordPress admins